Solid State Drives (SSDs) have already evolved from an exotic and expensive item to a standard storage device in almost all new computer systems due to their advantages over conventional hard drives (HDDs). Not only are they faster, less prone to mechanical damages, and consume less electricity, but they are incontestable as fast system storage devices because they process many small files extremely fast; which is necessary during system startup.

At the same time, they have two significant drawbacks: they are relatively more expensive (per GB) and prone to data losses.

Old HDDs have their own advantages though: they have a greater capacity with prices that are lower than modern SDDs, which is especially important for home or small business computers where cost of every component really matters. In addition, they're less prone to data loss: if something happens with a user's files, it's much easier to recover them from a conventional HDD. Finally, although these hard drives are slower, they are fast enough to play even 4K video smoothly.

That's why many common computers have the hybrid storage system: a relatively small and thus inexpensive SSD device is used to store the operating system, including its swap and page files, installed programs, and their scratch and temporary files, while a large HDD stores user files like pictures, videos, documents, and game installations. Such configuration provides the best price/performance ratio to date.

But there's another reason to have user files stored on a extra non-system disk. When something happens to the system disk, it has little or no impact on data on other disks. If the system disk becomes severely corrupt during a failed system upgrade, files on other disks will still be easily accessible to another Windows system.

The advantages of having an SSD as a system disk are so high that it is worthwhile to replace an old HDD with a new SSD even in relatively old computers. This is due to the fact that even systems with the outdated SATA II (3 GB/Sec) interface show a drastic increase in startup speed after their system HDDs have been replaced with SSD devices.

But there's one problem in such action: nobody wants to make a fresh Windows setup and then install all programs and games, make all necessary system adjustments, and so on. The good news is that it's not necessary. With R-Drive Image, our advance disk copying, imaging, and backup program, you can transfer your working Windows system from the old HDD to a new SSD device.

In this article we'll show you how to do that. Moreover, we'll explain to you how to use the old HDD to create a hybrid storage system where Windows and programs will use the new SSD as their system device, and your files will be stored on the HDD while keeping the standard user folder structure with My Documents, My Photos, and so on.

Transferring the system to the new SSD device
1. Start R-Drive Image and select Copy a Disk to a Disk on the Action Selection panel and click the Next button. 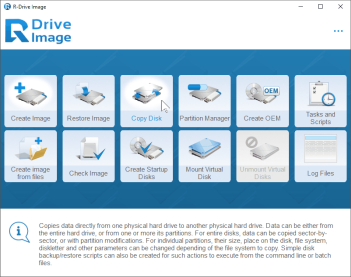 2. Select the present system disk as the source and the new SSD device as the target on the Object Selection panel and click the Next button. 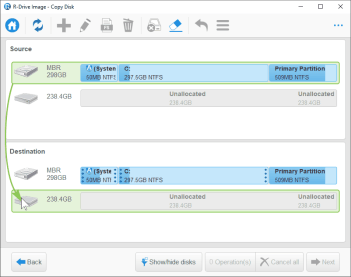 You may distinguish them by their size and data (or lack of).

3. Check that the Fixed active partition option is selected on the Restore/Copy Parameters panel and click the Next button. 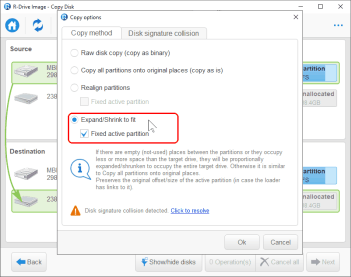 This option ensures that the newly created partition begins at the same place that the old one. This is very important because otherwise Windows loader will not be able to find the system partition and successfully load the computer into Windows.

As the disks are of different sizes, the only available option is Expand/Shrink partition to the whole disk. If the disks were of the same size or the new one was larger, the best options would have been to Realign partition with the Fixed active partition option. Such data realignment is necessary for SSD devices.

4. Select Same signature for both disks on the Disk Signature Collision panel and click the Next button. 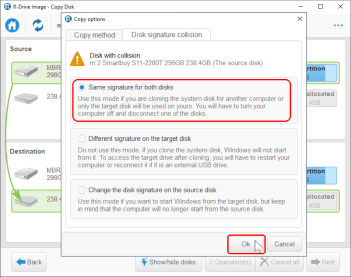 This is especially important for modern UEFI systems where Windows loader recognizes system disks by their signatures.

The signature conflict will be resolved later after the system has been transferred to the new disk.

5. Verify that all copy disk parameters are correct on the Processing panel and click the Start button. 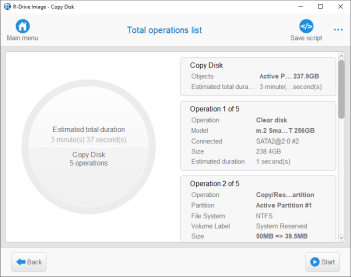 R-Drive will start copying data from the source HDD drive to the target SSD device showing its progress. 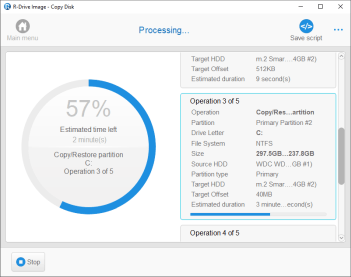 When this process is over, R-Drive Image will show the Disk copied successfully message. 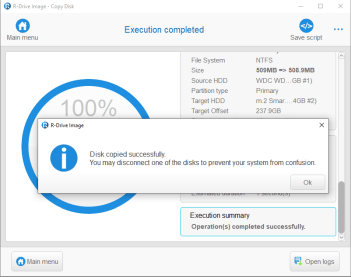 The first stage of our operation is now completed. It's time to check that the system has been correctly transferred to the new SSD device and connect the old HDD to the new system as another logical disk.

Starting the new system
1. Change the startup disk from the old HDD to the new SSD in computer's BIOS/UEFI and start the computer. The computer will load into the new Windows setup.

2. Run the Computer Management program and go to the Disk Management section. 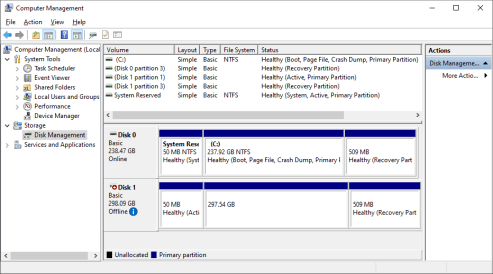 You'll see that Windows has switched Disk 1 (the old HDD) offline because it has the same signature as the new SSD device.

3. Right-click the Disk 1 icon and switch the HDD online. 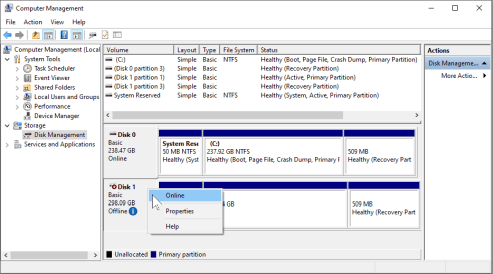 Windows will write a new signature to the HDD and two new logical disks will appear in the system. The first one is the system reserved partition of the old Windows setup. It contains no valuable information and may be safely deleted. 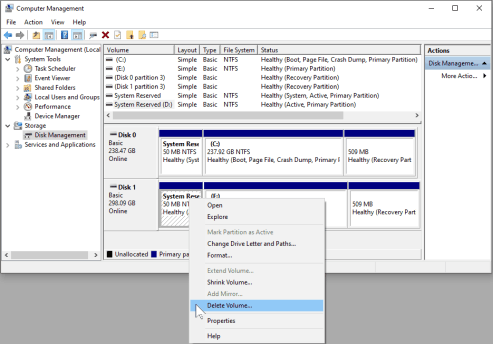 Windows will delete this partition.

Now you have two options:
* You may extend Disk E: to the beginning of the disk. In this case, all files on Disk E: will remain, but you'll need to go through the risky operation of volume extension. Right-click the logical disk, select Extend Volume on the shortcut menu, and follow the Extend Volume wizard. 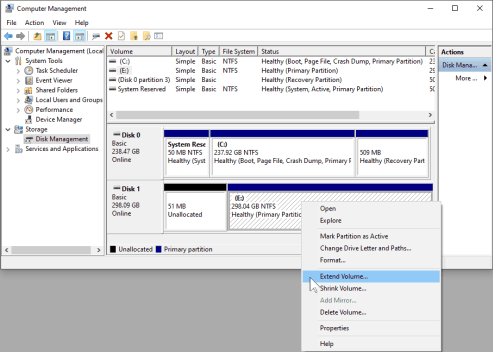 Then you may change the disk letter to D: and manually delete all files from the old Windows setup.

* You may simply delete old Disk E: and create new disk D:. In this case, all files on old Disk E: will be deleted. This is a much simpler and safer operation. 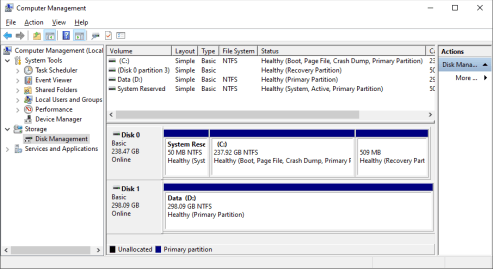 Now you may move your user folders and games to new Disk D:. Read these articles for detailed instructions.

Finally, you can write back your files from the backup if necessary.

Conclusions
As we have shown in this article, you may use R-Drive Image to transfer a working Windows setup from an old HDD to a new SSD device, and then how to create a hybrid storage system where the SSD device is used for the system storage device and an HDD to store your files.

Data Recovery Articles
PC Privacy Articles
Drive Image Feedback
65 feedbacks
Rating: 4.6 / 5
R-Drive Image is an awesome product that works flawlessly, every time.
Thanks
Rob Schuman
tried many backup products all failed and crashed. this backup made it easy and trouble free highly recomend it for simple easy use
colin (NA)
Hi, we own r-drive image.
Clonning a hard disk feature works great. but is it possible to schecule the clone option? will be great improvement and ease and fast option to restore a computer.
GERARD0 CARDENAS (FLETES ASTRO)
I`ve just about used them all. I recently ditched Acronis. Most have failed me when I needed them to work. Only R-Drive Image has been consistently dependable.
Leon
Leon Kunstenaar
I Have been using R-Drive for more than eight years. I had my file server wiped out two times in the past 2 weeks due to ZEPTO virus. (Both came from an email attachment). I do an R-drive full image backup each night. Both images rebuilt the hard drive perfectly. I have rebuilt several times over the years but I was in a real situation here and R-drive saved the day.
Bill F (J B Esker & Sons Inc)
© Copyright 2000-2021 R-Tools Technology Inc.