When SSD devices were becoming the go-to system storage devices, they featured relatively smaller capacity and higher prices when compared with traditional, mechanical hard drives. Now, however, larger SSD devices are becoming more and more affordable. As such, more and more computer users are starting to think about swapping their current SSD devices out for larger ones.

But there's one problem that may keep many users from doing so - a new SSD device requires Windows and the other programs installed to make the new system functional. Windows may be installed from scratch, as well as the programs, but this may be a very long procedure. However, there's another way - to move your already installed and working system to a new SSD device; which may be more preferable for many cases. This article will explain how to do that using our disk cloning, data backup, and partition managing program, R-Drive Image.

By the way, you don't need to buy this program immediately. It has a one-month trial period, during which it performs all its tasks without requiring registration.

In this article, we assume that you've already downloaded and installed R-Drive Image on your system.

Some information and advice before we begin:
Changing SSD devices requires some skill in working with computer hardware, primarily for disks with the modern m2 interface. Consult corresponding manuals for safety guidelines if in doubt.

We also strongly recommend you to backup all your personal files in case something does go wrong. Regular data backup is always a good practice, and our R-Drive Image is exactly intended for that.

A disk layout for a typical Windows installation
To see the disk layout on your computer, click on "Computer Management" and head to "Disk Management."

Moving Windows to the new SSD device
This procedure is for system partitions without BitLocker encryption. See our article, "How to Move a BitLocker-Encrypted System Disk to a New Storage Device" if your system partition is encrypted.

You may want to go to Disk Management to see that the new SSD device is visible to your system. From now on, we'll refer to the SSD devices as "disks", because Windows and R-Drive Image don't make the distinction between SSDs and HDDs at this level. 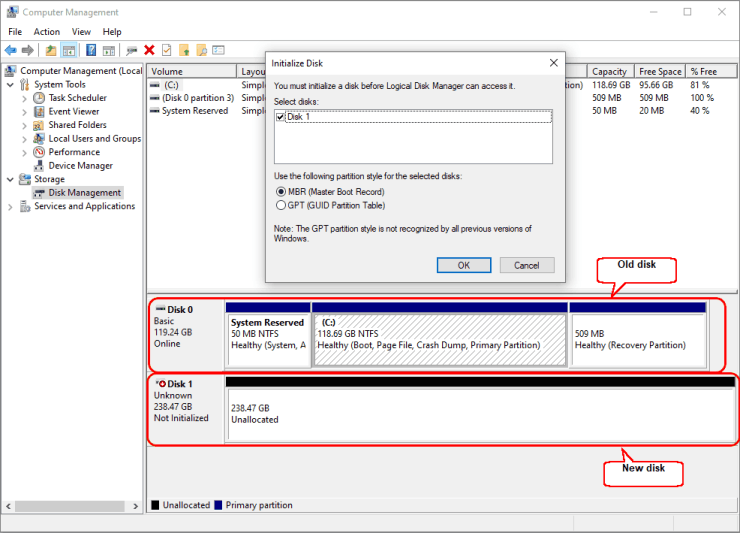 A pop-up window may appear asking you to initialize the new disk. You don't need to do that. Instead, just click the Cancel button. 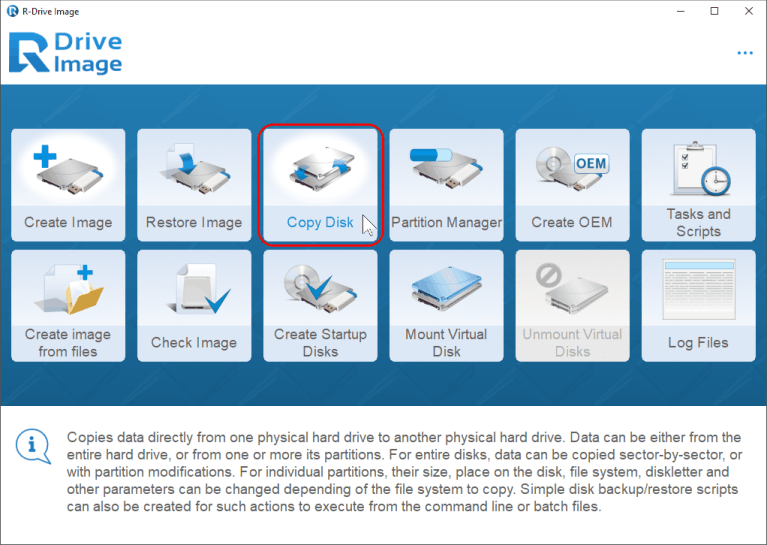 3. Drag the old disk (Source) to the new disk (Destination). 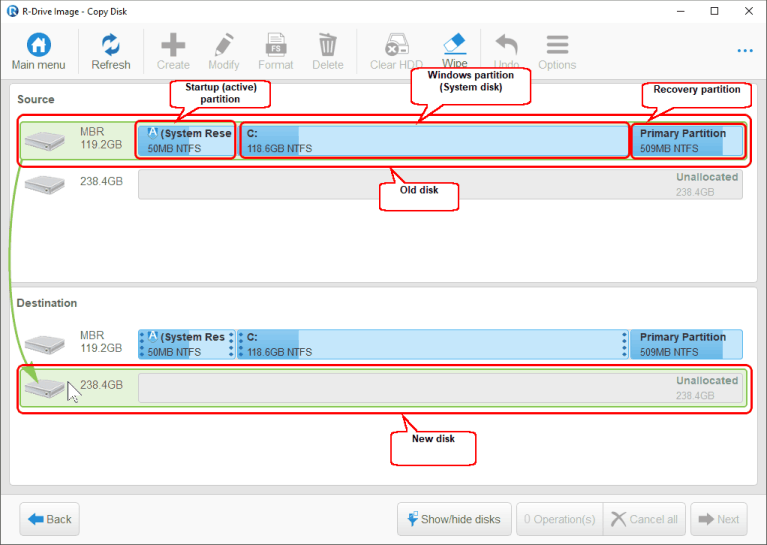 4. The "Copy options" window will appear. 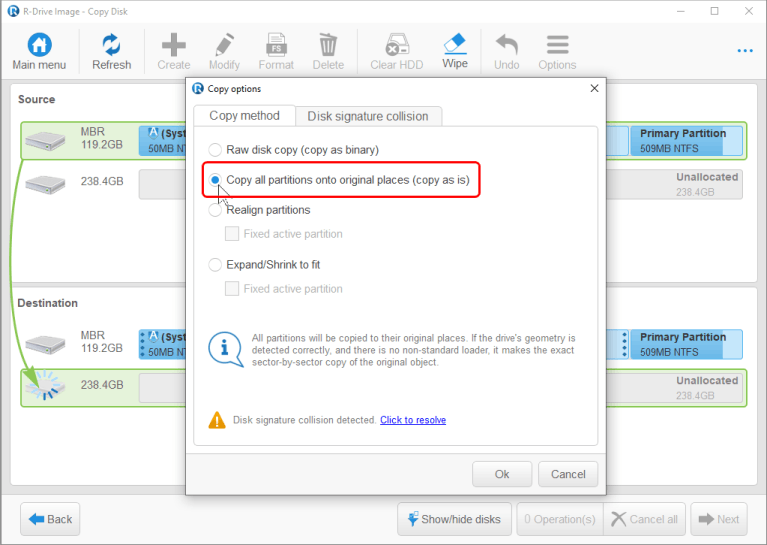 Select "Copy all partitions onto original places (copy as is)" on the "Copy method" tab.

5. Verify that the "Same signature for both disk options" is selected on the "Disk signature collision" tab and click the OK button. 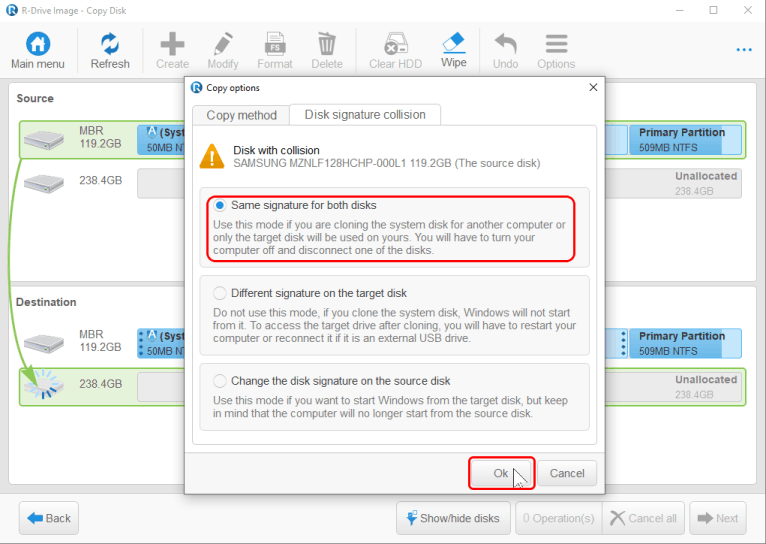 6. Drag the recovery partition to the rightmost place on the diagram. 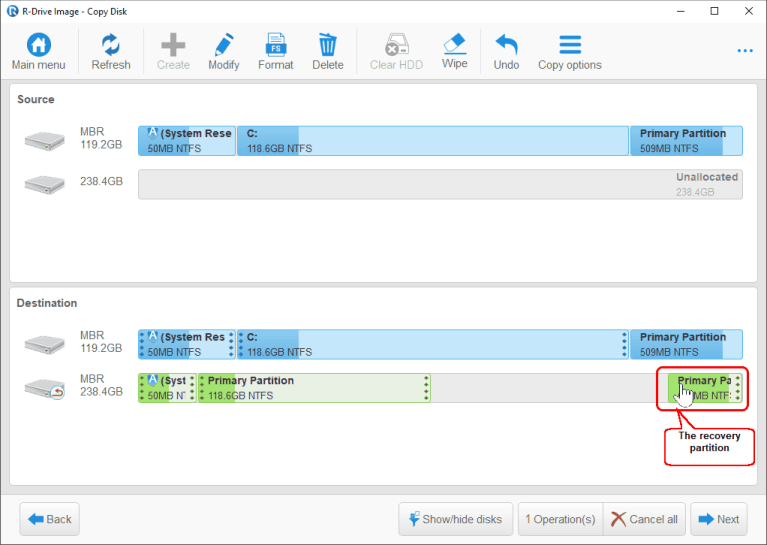 7. Click the right edge of the Windows partition, hold the mouse button, and extend the partition up to the recovery partition. 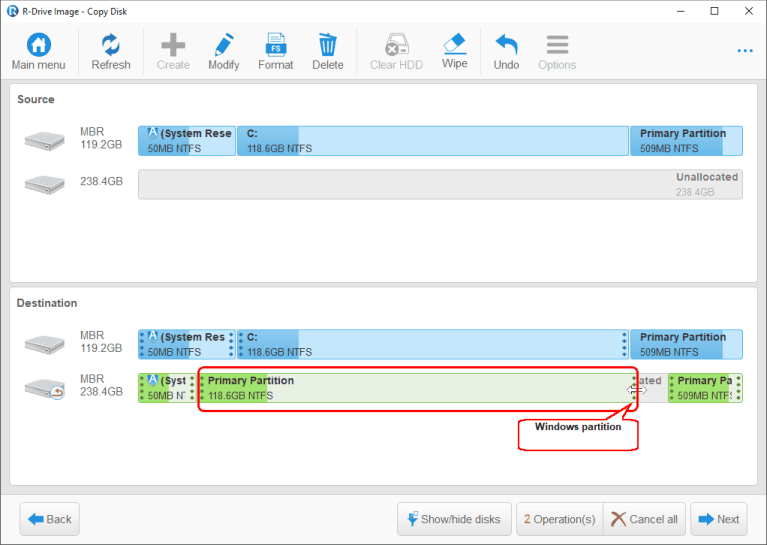 8. Verify that the final layout is correct and click the Next button. 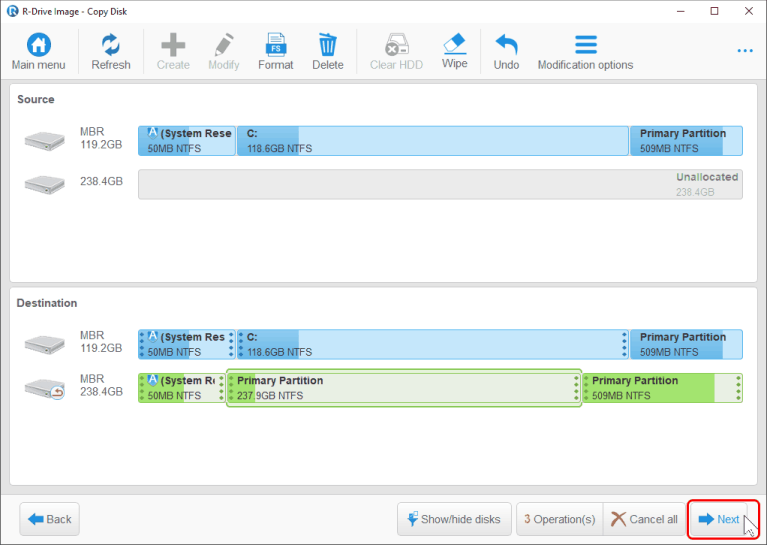 There may appear to be some small free space after the recovery partition. This is not an error. R-Drive Image may align the partition according to characteristics of the disk.

9. Verify that all information on the "Total operation list" panel is correct and click the Start button. 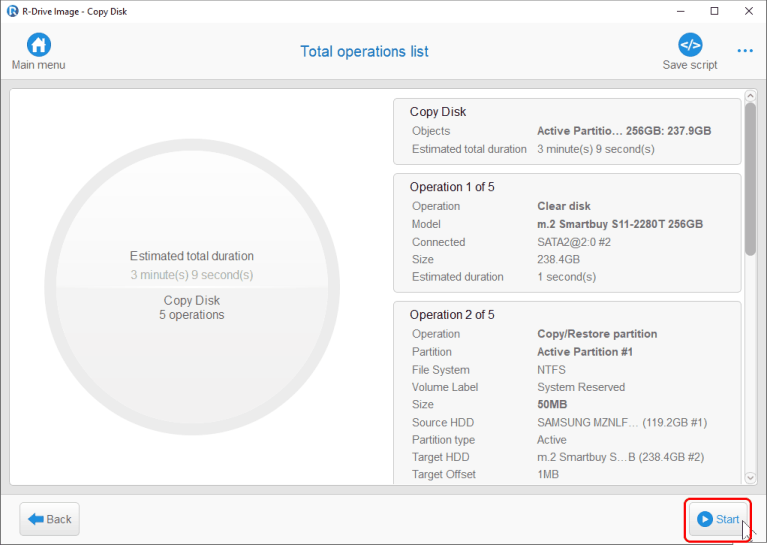 * R-Drive Image will start copying the data from the old disk to the new one while displaying the progress. 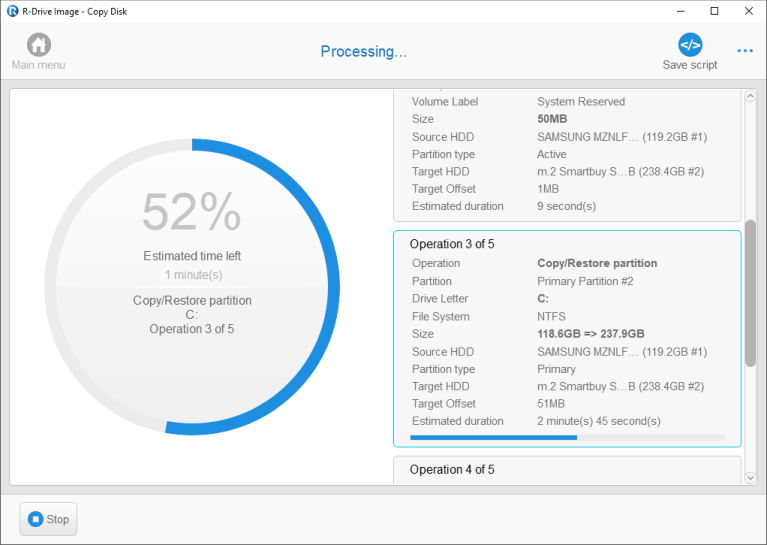 * When this process is over, R-Drive Image will show the "Disk copied successfully" message. 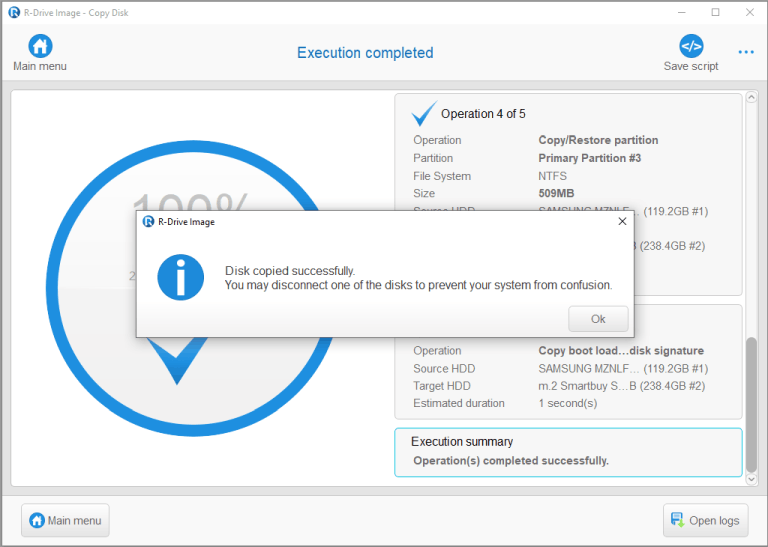 You may want to go to Disk Management to verify that the new system disk occupies the entirety of the new SSD device - except for the startup and recovery partitions, of course.

And that's all. Now you have the entire Windows system, your programs, and files moved to the new SSD device.

Data Recovery Articles
PC Privacy Articles
Drive Image Feedback
67 feedbacks
Rating: 4.6 / 5
I have been using R-Drive for many years, I trust my data to nothing else. The latest version has enabled me to do things I didn`t think possible in just a couple of clicks. Thanks r-tools!
David Tallent (Softrol Systems, Inc.)
Is there an ISO available for download so we can restore even though we no longer have a working Windows 10 machine anywhere in the building?
Donna (all)
R-Drive Image is an awesome product that works flawlessly, every time.
Thanks
Rob Schuman
tried many backup products all failed and crashed. this backup made it easy and trouble free highly recomend it for simple easy use
colin (NA)
Hi, we own r-drive image.
Clonning a hard disk feature works great. but is it possible to schecule the clone option? will be great improvement and ease and fast option to restore a computer.
GERARD0 CARDENAS (FLETES ASTRO)
© Copyright 2000-2023 R-Tools Technology Inc.