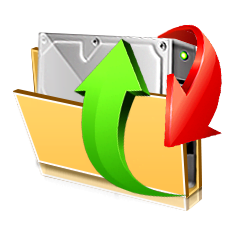 R-Drive Image files may contain images of entire hard drives, individual partitions, individual files, and even several unrelated disk objects. Data in such files may be compressed, password-protected, commented, and split into several files. R-Drive Image uses volume snapshots to create consistent point-in-time disk images. Image files can be checked for errors to ensure full data integrity. This check can be performed for both already existing images and new images automatically after their creation.

In addition to its native image format .rdr, Corporate, Technician, and Commercial licenses can create image files in the VMDK format widely used in virtual machines.

R-Drive Image restores images or individual files and folders from images to original drives, new drives, any other partitions, or even to free hard drive space on the fly. Partitions, being restored can be resized, and existing partitions can be deleted and/or erased, moved, or resized. Entire hard drive images can be restored to another drive, shrinking/expanding as needed.

To restore system and other locked partitions, R-Drive Image can be booted into its startup version directly from Windows or by using a separate startup USB pen drive or CD/DVD.

Most disk backup tasks can be scheduled to run unattended at a certain amount of time. For example, you can have R-Drive Image automatically backup a computer during off hours. Moreover, such tasks can be very complex to create data consistent and space efficient backup sets. The built-in scheduler has a very versatile and flexible control over the time such task(s) are to be started. Action reports can be sent via e-mail and external programs can be launched upon completion of every task. In addition to scheduled time, every task can be started manually.

Drive Image Feedback
65 feedbacks
Rating: 4.6 / 5
R-Drive Image is an awesome product that works flawlessly, every time.
Thanks
Rob Schuman
tried many backup products all failed and crashed. this backup made it easy and trouble free highly recomend it for simple easy use
colin (NA)
Hi, we own r-drive image.
Clonning a hard disk feature works great. but is it possible to schecule the clone option? will be great improvement and ease and fast option to restore a computer.
GERARD0 CARDENAS (FLETES ASTRO)
I`ve just about used them all. I recently ditched Acronis. Most have failed me when I needed them to work. Only R-Drive Image has been consistently dependable.
Leon
Leon Kunstenaar
I Have been using R-Drive for more than eight years. I had my file server wiped out two times in the past 2 weeks due to ZEPTO virus. (Both came from an email attachment). I do an R-drive full image backup each night. Both images rebuilt the hard drive perfectly. I have rebuilt several times over the years but I was in a real situation here and R-drive saved the day.
Bill F (J B Esker & Sons Inc)
© Copyright 2000-2022 R-Tools Technology Inc.